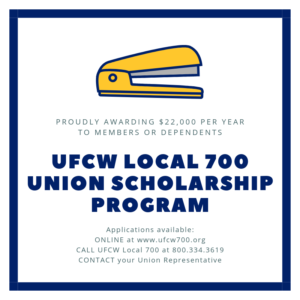 UFCW Local 700 is proud to award $22,000 per year in scholarships to members or dependents.

Applicants must be UFCW Local 700 members in good standing, or their legal dependents; have graduated or will graduate from high school or are currently enrolled in college or trade school; must have completed the SAT or ACT; and must be accepted to an accredited institution OR met the requirements and enrolled in a two-year community college, technical, or trade school.

Applications must be postmarked no later than December 3, 2019.

“UFCW Local 700 is proud to endorse Christina Hale,” said UFCW Local 700 President Chorpenning. “Christina Hale will stand up for our members in Congress just like she did in the Statehouse – for good jobs, affordable health care, and stronger communities. She has a long record of fighting for working men and women in Indiana. In the Statehouse she was able to bridge political divides to pass important legislation supporting working families – that’s why we’re standing with her.”