Members of UFCW Local 700 ratified an agreement with Kroger for about 800 members working in nine Kroger stores around South Bend.

The new four-year agreement includes improvements to the grievance procedure and more options for vacation. There are guaranteed wage increases every year and more positions will receive premium pay.

Pension benefits were secured through the UFCW Consolidated Fund ratified by members in 2011. Meat pension language was secured to maintain benefits.

UFCW Local 700 and Kroger reached a tentative agreement for about 800 members working in 9 Kroger stores around South Bend.

We were able to reach a deal quickly because health care benefits for South Bend stores were negotiated as part of the Indianapolis Stores agreement, and pension benefits were secured through the UFCW Consolidated Fund ratified by members in 2011.

Union Representatives will be in stores discussing details of the package on Monday, October 13, and Tuesday, October 14; voting will take place in stores on Wednesday, October 15.   Your Union Bargaining Committee recommends a yes vote, and ratification of the proposed agreement.

This week, UFCW Local 700 will begin bargaining for about 800 members working in nine Kroger stores around South Bend.  We’ve been preparing over the last few months and appreciate your participation in our bargaining and proposal survey; this input is very important to develop our priorities for negotiations.

Our first bargaining session is October 7, and scheduled to continue through October 9.

Make sure to keep up with the latest news on bargaining!   Email info@ufcw700.org with your name and  store number to receive bargaining updates. 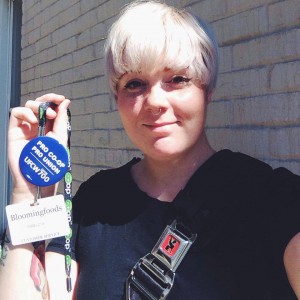 Workers at Bloomingfoods Co-op in Bloomington, Indiana are organizing a union with UFCW Local 700 to win respect, better benefits, and a voice on the job. Here’s what they have to say:

“I love the people that I work with, the food and products that I sell and eat, and the customers and member-owners that I’m so lucky to interact with. [Organizing] has the potential to create better job security, due process, improved health benefits, strengthened voices and communication.” –-Abby Shifriss

“I love Bloomingfoods and I believe it can still be one of the great hopes for our community’s future. But I am tired of watching intelligent and kind-hearted employees leave due to neglect and mistreatment. …I support a union because I believe the workers deserve a voice within Bloomingfoods!”--Andy Marrs

“Unionizing our co-op will bring a sense of camaraderie and give workers a voice in a safe and equitable workplace. Bloomingfoods is part of what I love most about Bloomington. …Pro co-op! Pro union!”--Casie Jetter

Unfortunately, instead of supporting workers in their efforts to create a better working environment, Bloomingfoods has taken a page from their corporate competitors’ playbook. The co-op has even hired a union-busting law firm to silence workers’ voices.

But Bloomingfoods workers won’t be silenced. They’ve launched a petition calling on the company to respect their right to organize. Will you sign and then share with your friends and coworkers?